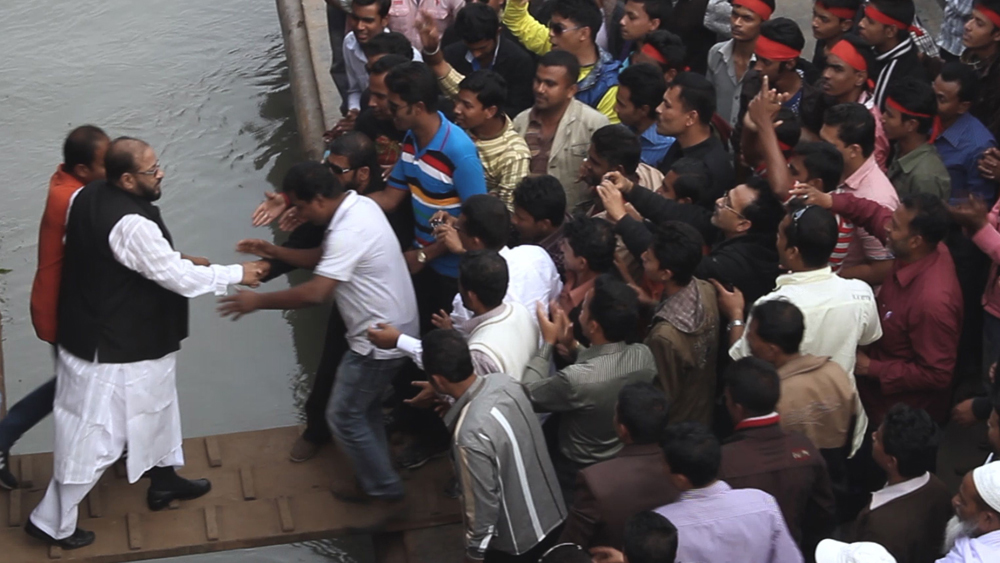 From “The Boat Show” to “Ship of Fools” to “Titanic,” if one particular strain of Hollywood melodrama has taught us anything, it’s that all human life exists on a passenger boat — our dreams, our desires, and our social differences somehow clearer at some distance from land. Bangladeshi filmmaker Qamar Ahmed Simon applies much the same philosophy to his delightful documentary The Day After…, albeit with its accompanying glamor removed. Boarding a century-old paddle steamer for a two-day river cruise from Bangladesh’s capital Dhaka to the country’s Khulna region, Simon documents the journey with geo- and socio-political charm, drinking in the landscape while observing anxiously the interweaving of classes, castes and personality types on deck.

The loose and entertaining score is equal parts leisurely travel novels, an observational social study, and a true-to-life comedy of bugs, premiered in competition at IDFA to welcome an enthusiastic audience. It arrived nine years after Simon’s last theatrical documentary, “Are You Listening!” – A study of a society recovering from devastating floods that won Cine du Reale top honors – “The Day After…” is the second part of the loosely defined “Water Trilogy”, and should gain significant momentum on the festival circuit. The distribution potential is strong as well, although it will likely be in streaming formats that won’t do the full justice to the wide-edged movie scene.

That’s not to say this is National Geographic’s tourist fare, however we do enjoy the views of the Ganges delta that we take along the way. Although the veteran boat (called Rocket, the nickname we soon collect does not indicate its speed) has a handful of European and American travelers on board, Simon’s mobile, inquisitive camera doesn’t give them any more special attention than the rest of the passengers do. From a local perspective, the factual collection of “The Day After…” is a social cross-section of contemporary Bangladesh, running the gamut from influential politicians to the poor and the disabled—divided, of course, by ticket category across multiple rocket floors and booths.

With the film being shot shortly before the country’s 2018 national elections — regular radio news snippets testify to the mood of a population angry at economic conflict and government corruption — there is a tension in this diversity. Passengers chained to cheap seats with a raspy voice because of segregation: “Is my tube different from that of cabin passengers?” Someone asks to take the camera while breaking his rank to use the “best” bathroom. Class politics appears in every aspect of The Rocket’s daily operations, whether it’s the staff tasting the special menu designed for the politician and his entourage or the eccentric captain using “born on duty” insults to warn the captain of another ship blocking the river.

This is just one of the many obstacles and mishaps the missile encounters on its way, as everything from thick fog to suffocating mud conspire to delay its planned two-day flight. (The film’s somewhat obscure title, peppered with inappropriate punctuation, alludes to this inaccurate timeline.) The captain takes any stop: “First-class passengers can enjoy a tour of the city,” he says derisively, “while third-class suffers in Everywhere.” Both groups make best use of the situation in different ways, with Simone’s gaze moving from wealthy girls in colorful headscarves taking selfies on the deck to a poor poor woman who fills the time with an impromptu song.

The filmmaker’s camera isn’t the only one on board, as “The Day After…” expands his vision to include the reporting of others—whether a group of brave Bangladeshi journalism students secure an interview in the politician’s private cabin (and gut responses once out of scope). hearing) or a young YouTuber shooting his video diaries of the trip, sometimes his footage is woven into the crowded fabric of the film. (His attempt to launch a drone provides one pure moment of slapstick amid more serious events.) Meanwhile, Western tourists also try to document the trip, distancing themselves from fellow travelers with blissful luxury never found in such goodness. A fun movie, but with a conscience. A local passenger is stunned by what she sees as a “random depiction” of Simon, noting the absence of a hero and heroine that any real movie would need, in her view. On the rocket, really, she can choose her own.